I am here to tell you about the Top 10 best tourist places in Sierra Leone. Sierra Leone is one of the African countries enriched natural views and resources. After the civil war Sierra Leone had lost much of the tourism sector. But the founders of the country are trying their best to rebuild the spots as before and they have taken a decision to make the tourist number double then before. It contains the white sand beaches as well as the high peaks of the mountains. The fascinating islands and unmatched wildlife in other part of the world has established itself a top tourism industry in Africa.

Mount Bintumoni is one of the best mountains for the riders. This mountain has its own beauty which can make its different identity among others. It’s a great place to climb up, hiking and mountaineering.  This is the highest peak of Sierra Leone with 1945 meters height. This is also known as Loma Mansa. The beneath parts of the mountain is covered with Green rain forests and contains several animals.

Africans had been passing through under slavery a long time ago. But so many symbols are still alive there. Sierra is an African country which contains so some islands and forts to resemble slavery. The bounce Island is one of the early British slave stations. The slave traders arrived in Africa and make this island one of the largest slave station. They come to Africa in 1670 and start enslaving Africans. This place has now become a tourism sector.

The Tacugama Chimpanzee Sanctuary is one of the amazing Sanctuary of Sierra Leone. It is located in Freetown and it will take about 40 minutes from the mainland of Freetown. The western area forest reserve has become more visited by the tourists because of the Tacugama Chimpanzee Sanctuary. It covers about 100 acres. You can go through Sanctuary by the new dirt motorway. It will be the best if you come on a one day excursion to see the lovely waterfalls, villages surrounding the Sanctuary easily.

Banana Island is located near the Freetown Peninsula at southwest coast. It’s a series of three islands, Dublin, Ricketts and Mes- Meheux. Dublin and Ricketts are the main islands. The headquarters of the Etisalat Telecoms Company is located at Banana Island. This place is perfect for snorkeling and diving.  The churches of 1881 ad the old slave docks of the traders of slaves can also be enjoyed. The Island forests and bat caves are also recommended by the travelers.

The Outamba Kilimi National Park is another Eco-tourism park in Sierra Leone. This dark green forest captured by two rivers makes a magical environment and attracts most of the tourists. The Rivers are Great Scarcies and Mongo Rivers. The dense bush is filled with some rare kind of elephants, buffaloes. This park was taken in consideration to be a National park in 1986.

The Turtle Islands are known by its character. These are the nest to the hundreds of turtles. It’s a combination of eight peaceful islands. There lies a fishing community on those islands. The fresh air and the clean and fresh water create the most amazing tourism field ever. You can enjoy fishing by yourself with the local experts. This Island can be reached by speedboat from Freetown within 3 hours. There is an option of saving money while taking the taste of the beach by waiting for the local boat to get there.

The Tokeh beach was one of most favorite to the 1980s French supermodels and they often visited this beautiful white sand beach. The peaceful weather and cheerful surrounding attracts the tourist mostly. This beach is located surrounding Freetown. Visitors can take a trip for the whole day. They can stay overnight there. It can be assured that they will not be bored. You can stay at the local guest house and resorts, they you can see the crocodile lady who attracts the fresh water crocodiles to have fresh fish.

The Gola Forest Reserve is the largest rain forest of the lowland area of Sierra Leone. This part of the county is known as the green diamond of Sierra Leone. The forest is being given so much importance as it holds most of the threatened wildlife. It’s located at Kenema District and includes some portions of Gaura, Tunkia, Nomo and Koya. 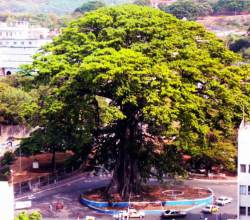 Cotton tree is may be an ordinary tree at Freetown, but it contains extraordinary significance. It’s a symbol of freedom of the Africans from the slavery. At this place the Afro-American people arrived at first. They stop at this place under the big cotton tree when they got their land as free land. They gather to sing and thank God for their freedom. This old cotton tree has been standing there for so long. The Supreme Court is located near the tree.

If anyone is thinking to plan a vacation tour or a honeymoon trip, then Sierra Leone should be at the top of the travel destination list.